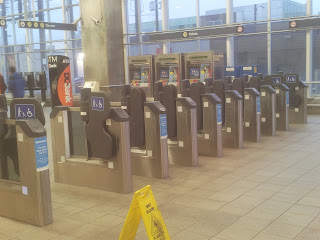 Above is the picture of the faregates on the North Side of the South Side of Commercial Broadway Station. You see: There are 9 (NINE!) Gates at this side of the station, each equipped to handle 40 pph. And this is the less intensive side of the station, where the only transfers are between the 9 or 20 and the skytrain. You may be unaware of the degree of overshoot until you see how many faregates are at Broadway-City Hall:

There are 5 (Five!) This Exit is more than 3X busier than the North side Broadway Station Exit above. Think about it; this is the major transfer between both directions of the 99B-Line and the Canada Line! Each Train that arrives at the station gives at least 50 people during rush, imagine the chaos if the 99 and the Train arrives together. My point is that with only gates, that is only 2 gates one direction and 3 gates the other direction. The maximum capacity for one of the direction with only 2 gates is 80 people. With more than 40 people getting off the bus at one time and even 80 people off the train, the waits just to enter City Hall station faregates will be >1 minute! Imagine lining up 70 seconds just to get into the Canada Line station!

This shows extremely poor planning on Translink's behalf, overshooting that side on Broadway station, drastically under calculating the volume of people using the City Hall exit. From my perspective, the only way 8 gates will be used is if the overhead walkway is closed down and people need to go down and back up again to transfer. But then again, there is a new walkway being built, and I can't imagine why there needs 160+ ppmpd (people per minute per direction) capacity at this exit.
Posted by Kyle Zheng at 17:13 No comments:

The Liberal Party of Canada is at a crucial point. With the 3rd leadership convention in 8 years the LPC lacks leadership and stability, but hope is on the horizon. I see a bright near future and long term strength in the LPC. Remember, after rock bottom, there's no way to go but up! The faster you fall, the better your recovery will be.

Politics in Canada is a Sandwich. The Conservatives are the bread on the top, maybe a little miracle whip which gives them a bit of 'zing'. The NDP are the bottom bun, with melted cheese. The Liberals? Right in the middle, just as they have always been, in the middle. The Liberals are the Veggies, the meat of this sandwich. A sandwich without the meat, is, well, bread. So it is very important that the Liberals stay in the middle, and don't, say merger with the NDP to become a piece of bread. People buy a sandwich for the meat and veggies, not for the dry, uninteresting bun. And I could keep going with this analogy but lets rather consider the alternative.

Lets see how well politics with 2 polarized parties are doing in the USA; the country is basically split dead in the middle. Almost exactly half the country is on the Democrat party and the other half the GOP side; the USA is a completely divided country, because they have no middle party. The LPC, as the meat of the sandwich, are the best of both sides, doing what's best for the country rather than pleasing their core supporters on the right or left.

Justin is seen as an approachable, friendly young man who knows the issues (and the latest pop culture). He is a remarkable speaker, and a master at appealing to our emotions; He is fluid and soft in his speaking. Just see his commercials: [here] [here] and [here]. See how Justin looks approachable in these videos? He looks in the camera and speaks to you, uses a low quality camera, has a soft voice, wears a t-shirt, and smiles. And, of course, he's cute.

Why not Justin Trudeau?

Justin is a flip flopper. One day, yes to gun registry, another day, no to marijuana, then no to Gateway Pipeline, but yes to trade with Asia, and now Yes to Alberta Oil, and yes to Exporting energy, and Yes to fewer CO2 emissions. Make up your mind already! I sense that Justin himself is confused with the terms "Gun Registry" and "Accessible Guns". Yes to "Gun Registry" means No to "Accessible Guns".

But Justin makes a good point about at the end of this Global Interview:

"People want to know where you stand; even if they disagree with where you stand, they're going to want to know what your position is. Sure it gets me in trouble and it will continue to get me in trouble [but] I will continue to say what I think and think what I say, If it means stumbling every now and then because I've said something too direct, well so be it I know Canadians can handle it."

It is good that he knows and and admits that he's a flip flopper, and this is what makes Canadians believe that they can trust him.


Yes there are other Candidates in the LPC Race, but No I don't think they have a chance to win especially considering with preferential ballot, people will give Justin a 2 or 3 if not a one. And I think it's good that Justin will win; he is the only one out of the nine (except maybe George) that doesn't look like an out of touch politician (meant as an insult) who cares about partisan gain or one who just is too old and bad looking to win over Canadians (Marc looks like Iggy who lost over looks).

Another issue is spreading word that ALL ELIGIBLE VOTERS CAN SIGN UP TO VOTE FOR THE NEXT LIBERAL LEADER FOR FREE!!! Walking in the streets of Vancouver, it is vastly apparent that all technologically disabled (most over 50 years old) and the politically inactive, don't even know that there is a leadership race going on, let alone signing up to vote. IT'S FREE. SIGN UP TO CHOOSE THE NEXT LIBERAL LEADER NOW!
Posted by Kyle Zheng at 19:41 No comments:

-THIS BLOG IS NOW DEFUNCT! CLICK HERE TO PROCEED BACK TO MY ACTIVE BLOG.

-About this Blog
-Reading

Look me in the Eye